Now that we know how to import a model into our scene; let's learn how to create our own model using a 3D software.

There are many software like Cinema 4D, Maya, 3DS Max, Blender, ZBrush, Marmoset Toolbag, Substance Painter, etc. These are great, and they differ on divers criteria like the UX, the performance, the features, the compatibility, the price, etc.

In this lesson, we are going to use Blender because it's free, the performances are remarkable, it works with all primary OS, it has many features, it has a vast community, and it became a lot easier since the 2.8 version.

Be aware that you won't be a Blender expert at the end of the lesson. It would take a full course to learn all its aspects, and they are already many great resources to learn. The idea is to understand the basics and de-mystify the software to have sufficient baggage to create simple models.

At the start, we will discover all the basics. That will be a lot to take in but don't worry; we will repeat most of the shortcuts, the mechanics, and the features multiple times.

If you pressed a wrong shortcut at some point, you lost your scene, or the interface is completely messed up, just close and re-open Blender.

The software is pretty light, and it shouldn't take more than a few minutes.

Once downloaded, simply install it.

The lesson has been written and recorded with Blender 2.83.5. While there shouldn't be major differences, keep an eye on potential changes.

The splash screen gives you access to some useful links, templates, and recently opened files. 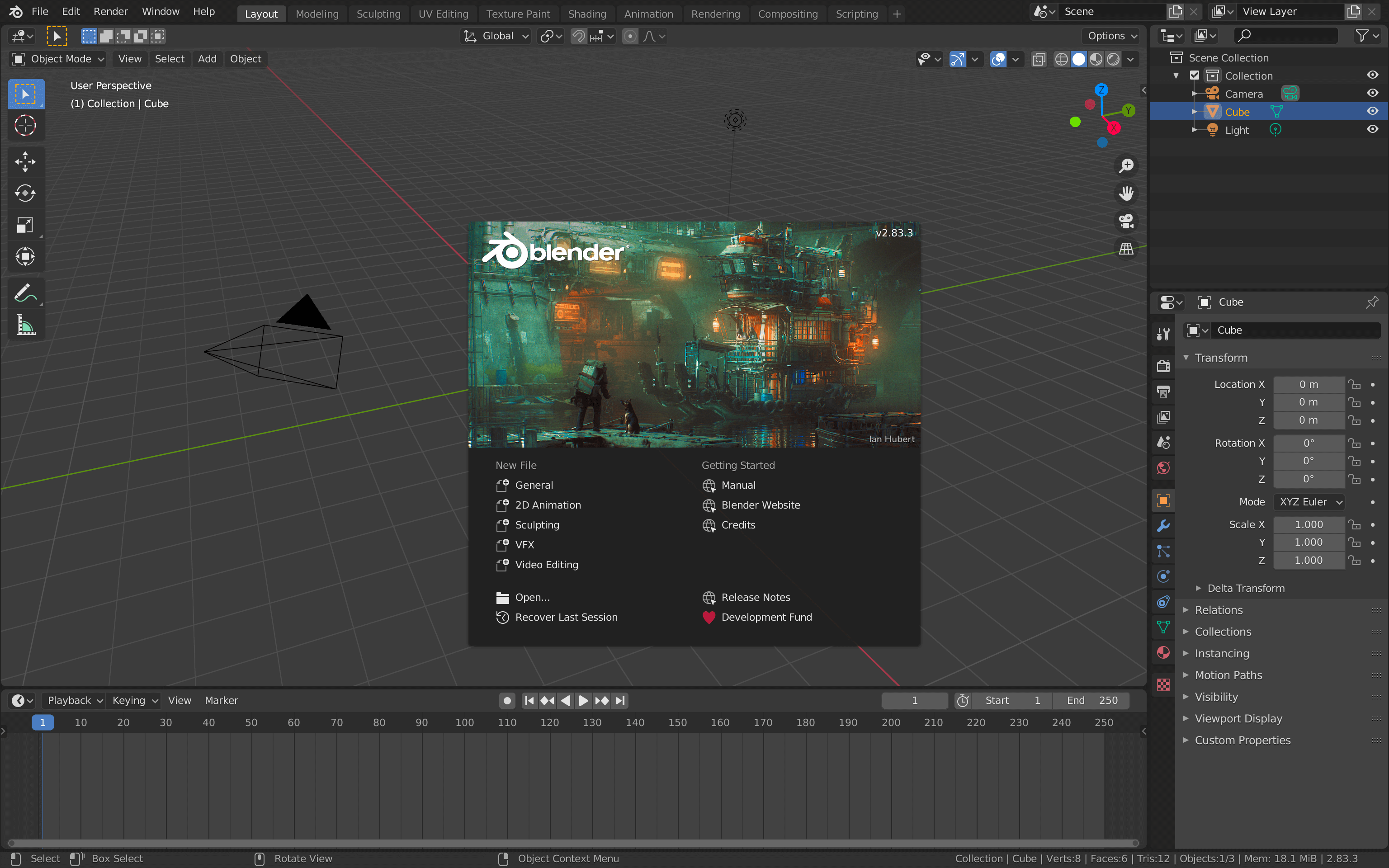 The image changes with the Blender version, so don't be surprised if you have a different one.

You can also see the exact version on the top right of it.

Click anywhere out of the splash screen to close it.

The different parts of the interface are called areas. Areas are very flexible, and you can create the layout that you want.

By default, you have the main area called the 3D Viewport: 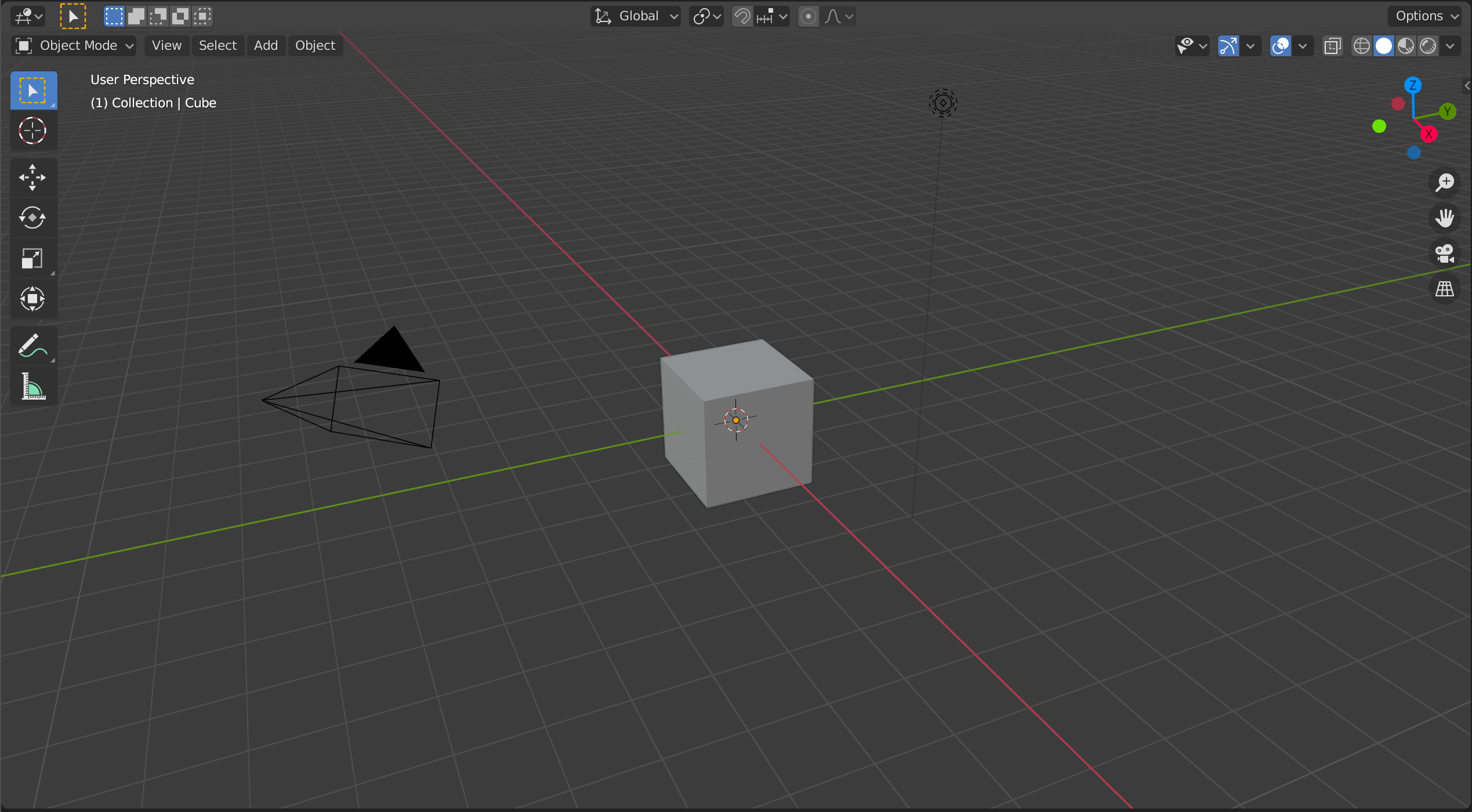 The Timeline to create animations:

The Outliner to see and manage the scene graph (or scene tree): 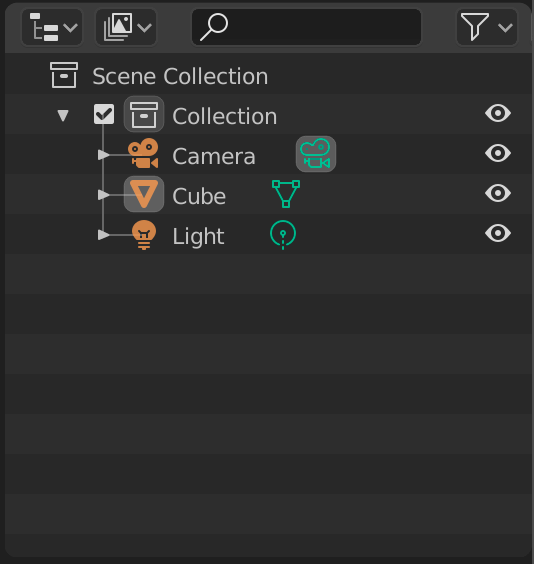 The Properties to manage the properties of the active object (selection) and the environment:

To change what an area is displaying, click on the top-left button of that area. Here, we are going to change the Timeline area.

We are going to change the Timeline area for another 3D Viewport: 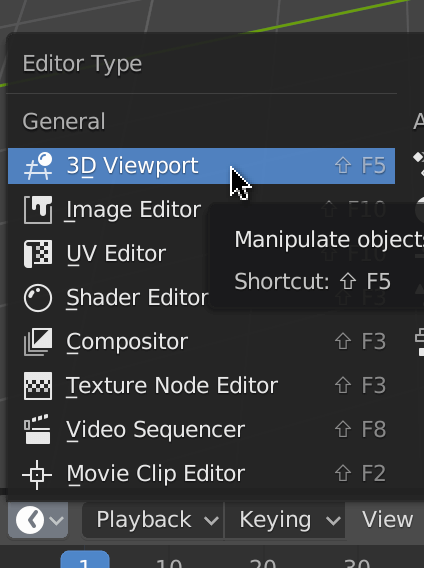 To resize an area, position your cursor between two areas and drag & drop:

To create a new area, first, we must decide what area we want to split. Then, we must position our cursor in one of the four corners of our area (a few pixels inside the area):

Finally, we drag and drop in the area we want to split:

Removing an area is a little tricky, and you might end up with dozens of unwanted areas. Don't worry, once you get the idea, it will be fine.

In a way, we don't remove an area; we un-split two areas. First, you must decide which one of the two areas is going to take over the other. If you want to remove the right area, start from the left area. Then place your cursor in one of the two corners adjacent to the area we want to remove (few pixels inside the area that is supposed to take over the other):

And then drag & drop (just like we did to create an area) but this time in the opposite direction (toward the area we want to remove):

It can take a few tries but you'll get it.

One of the strengths of Blender is its shortcuts. There are tons of them, and once you master the basics, you can be very efficient. Don't worry; you can use all the shortcut actions through the interface or with the search panel that we will see later. Throughout this lesson, we will discover some of the more critical shortcuts.

One important thing to understand is that shortcuts are hovered area sensitive. That means that the same shortcut can have different actions depending on what's behind our cursor. Most of the shortcuts we will see in this lesson concern the 3D Viewport. You should always make sure to keep your cursor above one of these areas when pressing the shortcut keys.

The shortcuts are also mode sensitive, but we will talk about modes later.

Only one or two shortcuts that we will see are different between Mac and Windows. If there is a difference, both versions will be cited. If the shortcut includes the CTRL key and you are using a Mac, do not assume it's CMD. Use the CTRL key instead.