To this point, all the exercises have been small enough to fit into a single JavaScript file without struggling too much. We've separated the different parts of our code by using block comments, and we've scrolled a lot.

But real-life projects tend to have much more code. Having everything as tangled as spaghetti in one file soon becomes an issue. For example:

We need a way to structure our code in a more maintainable way.

Though this course is dedicated to Three.js, we are going to learn JavaScript concepts like classes and modules for this lesson. They will become very handy when it comes to organizing our code.

In the following parts of the lesson, I will show you how I (Bruno Simon) like to organize my code. This is based on very personal preferences that you might not agree with, and you might be right. Don't hesitate to create your own structure and only take what you think is good from the following advice.

In the rest of the course, for simplicity's sake and in case some of you are not comfortable with what you will learn here, we won't be using the structure presented in this lesson. We will keep coding all the JavaScript in one file (spaghetti style). But if you feel comfortable trying the new structure in this lesson, you can adapt the following lessons to the new way or to your own structure.

Modules are one of the most important features used to structure our code. The idea is to separate our code into multiple files and import those files when we need them.

We actually already use modules when we import dependencies like this:

But this time, we are going to import our own code.

When using Webpack, all our imports are merged into one file that will work on most browsers. This way, we don't even have to worry about the compatibility of modules.

Furthermore, modules are now natively supported by most modern browsers without using a bundler. But, we aren't going to use that native support for a couple of reasons:

We are going to ignore the current state of our project for a moment to focus on syntax.

In /src/script.js, comment out everything (even the CSS import).

In the /src/ folder, create a test.js file. We are going to add content to that file and import it into script.js.

A file can export one or multiple things, but, to keep things simple, I like to export only one thing per file.

To do that, write the following code in test.js :

And then, to import this code into /src/script.js, write the following code:

And that's it. Check your console and you should see Hello modules.

One very important detail is that the path starts with ./. When we refer to a file, we need to do it that way, otherwise Webpack will try to find it in the node_modules folder.

Here, we exported a string, which is not very useful. But we can export functions:

We can also export objects:

And we can also export classes, but we are going to see that later.

The export instruction can also be done after the object:

And as I said earlier, one file can export multiple things:

By exporting multiple things, we don't need to import everything in the module. We can select what we want:

And this is actually how Three.js classes can be imported without importing the whole library.

Currently, when we import Three.js, we do:

And everything that is being exported from three will be available in the THREE variable. But we could have imported specific classes like this:

But again, we are not going to use that feature and each one of our files is going to export only one thing.

Now that we know how to separate our code into multiple files, what should we export and import exactly?

We are going to use classes for exporting and importing. Classes allow us to use Object-Oriented Programming in JavaScript.

Classes are supported by most browsers (Can I Use), so we can use them without trouble.

Remove the code related to modules (even the test.js file) and leave the rest of the code commented. We are going to focus on the classes now.

To create a class, use the following syntax in /src/script.js:

If you test this code now, nothing will happen because our class is currently empty and we haven't used it anywhere else in our code. But, in the classes in the example below, we are going to put some code between the {}.

Also, you should note that class names, by convention, usually use the PascalCase where the first letter of each word is in uppercase.

Let's imagine that our class is a blueprint to create a robot:

To create a robot from that blueprint, we would need to write this:

And that's it. Though this class does nothing and thus our robot variable does nothing, we created a robot out of our Robot class.

The robot variable is what we call an instance of the class.

As already noted, we can also create multiple instances of that class:

All of those robots will be based on the same class.

That's cute, but our robots can't do anything. We can add functions to our robots like this:

Functions inside of a class are called methods and every instance of the class will have these methods.

Now, each one of our robots can say "hi".

But how impolite it is for those robots to not say "thank you" to their creator for being created!

If you add a method named constructor to the class, this method will be called automatically when instantiated:

Now, every robot being created with this class will say "Thank you creator" automatically when instantiated.

We can also provide parameters to that constructor.

To illustrate that, we are going to give a name to each one of the robots:

And to retrieve those names in the class, we can add the parameter to the constructor function:

But what if we also want the robot to provide his name when saying "hi"?

We already sent the name to the constructor and we don't want to send it again to the sayHi function. What we want is for the robot to remember his name.

We can do that with this. Write the following code:

this is what we call the context. Though the class is the same for each instance, the context will be different for every instances of the class.

In our case, this will be the robot itself.

this is accessible in every method which is why we can now retrieve the name of the robot in the sayHi function:

name is what we call a property of the class. We can add more properties:

We can also access properties from the instance outside of the class:

Methods are also available from the context and we can ask the robot to say "hi" automatically in the constructor:

All the methods of the base class will be available in the new class.

To illustrate that, let's add a feature to our robots so that they can fly. But not every robot can fly like Wall-E. Still, every robot needs a name and legs.

To create a class based on another, use the extends keyword. Create the following class after the Robot class:

We have created a FlyingRobot class which we can now use for robots that can fly:

Currently, this FlyingRobot doesn't add anything to the Robot class, but we can add methods like this:

Robots instantiated with FlyingRobot will still be able to say "hi", but now they will also be able to take off and land:

But if we try to do the same with Wall-E:

We get an error. Wall-E isn't an instance of FlyingRobot and thus can't take off.

Providing a method with the same name to the FlyingRobot class will override what the method does in the Robot class:

But if you want to provide a different constructor, you have to start the method with super() and send the needed parameters to it:

We can also use super to call methods from the base class. As an example, we can make the robot say "hi" like it use to and then, in another log, say that it is a flying robot:

But this approach tends to complicate the code.

That's it for classes.

Combining the classes and the modules 37:45

The idea here is that we are going to separate our code into files and each one of these files will export a different class.

To illustrate that with the robots, create a /src/Robot.js file and put the Robot class in it, but with an export default at the beginning:

Now create a /src/FlyingRobot.js file and put the FlyingRobot class in it, but with an export default at the beginning:

Before importing them, however, we need to fix an issue.

FlyingRobot inherits from Robot, but Robot isn't available in the file. We need to first import that class to refer to it.

In /src/scripts.js, we can now import and use these classes:

And our code to create robots becomes suddenly very simple.

At first, all of this might seem a bit complicated, but your code will become much more maintainable and you'll be able to reuse it in different projects simply by copying the classes you need.

It's time to use this new knowledge in our project.

Remove the code that we have added above and delete the files related to the robots.

If you uncomment the project code, you'll see a simple scene with a fox on a floor. 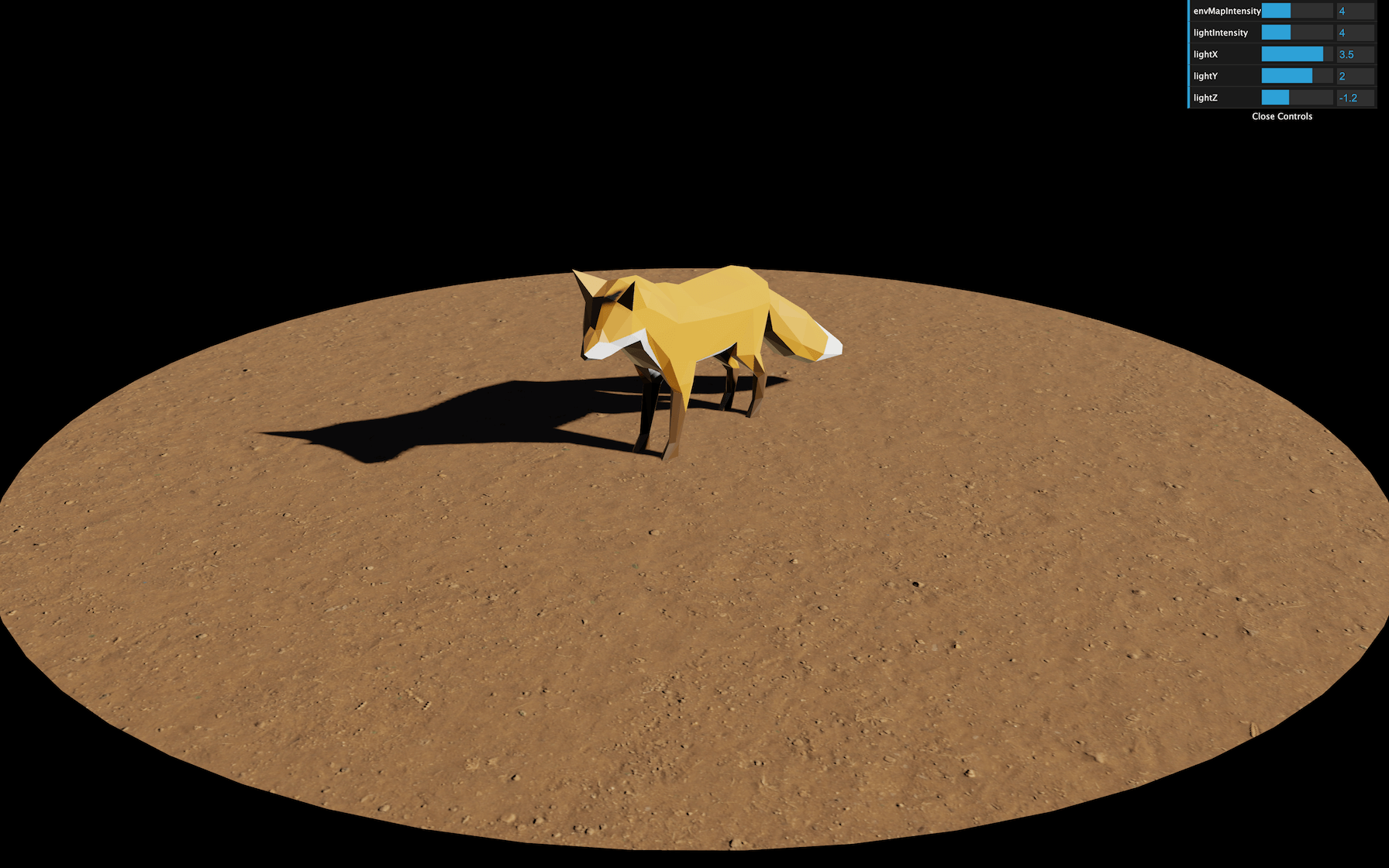 We are going to keep the existing code and move it into classes piece by piece.

Comment the whole code again except the style (import './style.css').

A good practice is to put the whole experience inside a main class that will then create everything else. This is particularly useful if your WebGL experience is part of a bigger website with HTML content, other pages, etc.

The code related to your experience will be separate from the rest of your code, but still accessible through the class and all the methods and properties you provide within that class.

As for the name of that class, I like to use Experience but it can be MySuperGame, WebGLAwesomeStuff, Application or whatever.